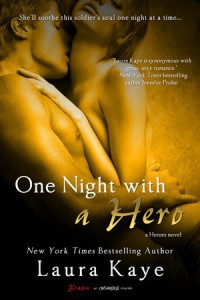 First of all let me say that I still can’t believe that One Night with a Hero has been written by the same author who wrote Hearts in Darkness. I loved and devoured this fabulous little read which featured great writing and wonderful characters. I’m sorry to say it but my biggest issue was that I didn’t recognize the author’s voice anymore! What happened? One Night with a Hero is a disappointment. Everything about this story felt stilted, wooden, forced, exaggerated and the writing is very cheesy. I know what I like but this isn't it.

I have nothing at all against flawed heroes or characters in general. If anything, it makes them interesting and real. However, when the author is drowning the hero’s characterization and issues in a sticky mess of ridiculous melodrama, then the story and its main protagonists can’t hold my attention anymore.

Brady treated Joss like s*it when she told him (view spoiler)Frankly, I wanted to hit him. Well, what else could you expect from a first-class jerk anyway? By the way, the (view spoiler) The plot was very predictable. On top of that, Joss’s ex-boyfriend(view spoiler)

Our hero has HUGE anger management issues. Oh boy, the guy totally freaked out when his sister told him (view spoiler) Later on Brady totally lost it again when they were attending (view spoiler) Yeah, Brady, get a grip and man up! Ugh! Oh well, and then wonders never cease, right? Out of the blue he became this über, über, über sweet guy. Hence, I found myself battling against a sugar induced coma. The author never came up with a believable transition or a well-explained resolution. As it was, she hardly scratched the surface. Not. Good. Enough. Just another little detail that was so not plausible either…Brady was sick as a dog, highly feverish, vomiting and Joss took care of him...you get the gist…and he was thinking about (view spoiler) I would like to meet the man who wants (view spoiler) Yup.

Even though the author tried incredibly hard to force my lacrimal glands, I. Just. Couldn't. Cry. If anything, she annoyed me with her cheesy writing. Note to the author: I don’t want to feel forced, it has to happen naturally. I suppose if you dislike the characters then it’s hardly possible to feel anything close to empathy or pity anyway. In fact, I’ve had some serious eye-rolling moments and I wanted it to be over. The only reason it did not end up as another DNF was the fact that I was always hoping it would improve. Oh well, I’ve had to wait till the cows came home. As in never ever.

The sex
While the steam level was ok, the sex itself was uninspiring, boring and unerotic. While we’re at it…Brady’s come on was solame. Enough said.

Overall verdict
The day I never have to see Brady Scott again cannot come too soon for me. Too often the author's voice was saccharine to the point where my teeth hurt, and I thought I was reading one of those 80s or 90s Harlequins. Granted, what does not suit me, may suit you and that's fair enough. Conclusion: don’t mind the Baba rant, just read it and maybe you’ll love it. It’s just not my cuppa. One Night with a Hero is another book that I'm going to put on my shelf books-everyone-loved-but-baba.