So NOT worth the fight. 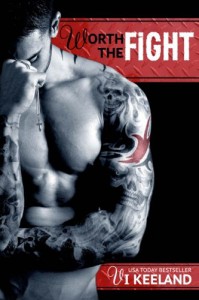 I have nothing positive to say about this book. Considering the very high average rating and all the gushing four and five-star reviews, I'm extremely disappointed that Worth the Fight didn't live up to my expectations. Do you know what I loved about it though? It's most certainly the premise of the story because I devoured Willing Victim. However, I won't beat around the bush. Nico can't hold a candle to Flynn, hero of Willing Victim. In fact, he seriously needs some coaching when it comes to getting down and dirty between the sheets. And don't get me started on the lame dirty talk. He has nothing on Flynn in that department either.

As I see it the entire book was redundant, repetitive, cheesy and extremely boring. To be very blunt it was a poorly written story. The chronology of events:

Add in some dark past and some waterworks aaaaand rinse, repeat. You know that might be another problem of mine. How many times do we get the same plot over and over again? I get it that authors need to spice up a plot by adding MCs with a troubled past. BUT. I don't bond with male characters solely based on their hot physique and I sure as hell don't connect with a woman who acts like a little girl. I really, really need some substance, some GREAT characterization and some darn good and titillating sex otherwise a story won't hold my interest. Period.

Shallow characters, a narrative that reads like a lame class essay and no chemistry between the main protagonists didn't made my Saturday, that's for sure. My mood matched the weather coz it was raining cats and dogs here.

Everywhere I looked Worth the Fight was labeled as adult contemp romance, yet it reads like a sugary sweet NA romance. Sorry but that's definitely not my cup of tea. At all.

Apropos, what's up with all those smiles, looking amused and whatnot?

I smile back. I don't have to fake it, it's a real smile.

He smiles, it's a mischievous smile, lopsided smile that makes me think the man is playful.

His crooked smile makes me smile and I lose my train of thought.

…and his smile is bigger when I return, he looks amused.

And he catches my eyes when I do and smiles. I smile back, even though I'm aware he just completely played me.

Nico smiles a devilish smile and I get the urge to kiss it right off his face.

He smiles, and I'm caught in his boyish charm.

I smile back and raise an eyebrow…

his face is amused

Nico looks down sheepishly and then I see the cocky lopsided smile that just melts me somehow.

I smile, even though he can't see me. Yep, I'm a school girl with a crush so big, I'm smiling when he says hello on the phone.

I smile at Regina. I'm a little embarrassed that I dressed for a man, but Regina is my friend and won't judge me.


It goes without saying that all those smiles made me roll my eyes.

Now let's get to the writing. Here are some "quotes" to your perusal.


"It smells good." Nico crinkles up his nose and it is an absolutely adorable face. One that looks like he's five years old. I'm so enthralled by how such a large, powerful man can look so adorable, that it takes me a minute for his words to register.

The part that is touching me is thick and hard…

the tip of him

Please, please do call things as they are. To her credit I must say that she came around eventually. Thanks for small favors.


Nico slowly draws out his tongue and licks me unhurriedly from my entrance to my clit. He stops as he reaches my swollen bundle of nerves and flitters his tongue ever so slightly over it.

spearing himself into me…

My already swollen nipples respond, and swell even more, enough so they are no longer below the surface of the water. Now the full tips are sticking out from the still water of the bath. No longer protected by the warm soak, the cool air meets the swells and it's...

Everything about him is just so purely, deliciously male. His square jaw, his green eyes that turn grey with desire when he comes near me, the way he looks at me like he's a hunter and I'm his prey. He's incredibly distracting. Even more so sitting in nothing but a towel. Lucky towel.


Also, the constant swellings got on my very last nerve.

Tingling sensations shoot through my veins and I feel the sensitive skin between my legs swell.

…his thumb gently reaches out and feels the curve of my swell.

The swell between my legs that was ebbing, flows back at a rapid pace.

…taking my swell into his mouth and lashing me with his wicked tongue.

With my eyes still closed, I drag my fingernail over my swollen nipple and it swells even more under my touch.

…squeeze my legs shut to calm the swell growing between them.

The swell of my nipples is now seemingly connected to the swell between my legs.

Seriously??? Coherent thoughts elude me when I have to deal with that kind of writing. It's mind-boggling.

I really don't have a problem with first person POV present tense, but in this case it didn't help to establish a compelling and interesting story. In fact, it felt amateurish and awkward. Also, if my memory serves me right the first person POV present tense did alternate with past tense in the beginning of the story. Anyway, if I'm wrong then it shouldn't bother you because it didn't influence my rating.

Sorry for being harsh but this was another "blah" story. One book among many, many others, once read and easily forgotten. Book goes back to Amazon for a refund of my money. Onwards…