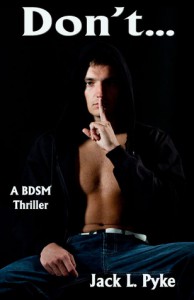 "The bondage, the whips, the scenes; they…they don't turn me on. Gray--Gray turns me on with his patience, his self-control, his ability to just glance in my direction and hold me still. Mmmmm. He's…he's behind it all, and so long as I know that, I know I can calm myself enough to follow any order, feel any (view spoiler) without feeling as though I lose control, or feeling like I need to stay in control and hit someone for touching me."

Whew…what the heck did I just read? A big fat yes from moi for the originality of the plot and the kinky sex! *fans self*

Don't read this book if you're not into M/M…

Don't read this book if you're afraid of the unknown...

Don't read this book if you're fainthearted…


Although I must tell you that you're missing out if you're not going to read it.

Whichever way I look at it, I think it's best to not extensively review Don't…because this story works best when you don'tknow too much about it. Don't you enjoy original surprises? Don't you enjoy to feel a tingling sensation or a creepy feeling that's going to sneak up on you unexpectedly?

We have three main protagonists. Jack, Jan and Gray. Each of them accomplishes a different role. However, (view spoiler) was so gloriously hawt and the very best role of all. Excuse me but I just had to pick up my jaw from the floor!

Jack is Gray's sub. Although there's clearly more to the bone I prefer to not go into details here. Surprise, remember? Jack is a special dude. He's antisocial to boot and suffers from (view spoiler) So, while he's got many flaws, Jack is also very protective and he's fiercely loyal to Gray (and Jan).

Jan is the vanilla type who helped to ground the high-strung Jack. He's actually the least interesting of the trio, IMO. Don't get me wrong, I definitely liked him but he wasn't really capable of heating up my blood. He's nice to have but that's it. No more, no less.

And then there is the most fascinating character. Gray. He's the Master Dom (view spoiler) He's also a big shot at (view spoiler) Gray is Jack's tower of strength. He taught Jack patience, control and respect. Plus, he's the oldest of the trio and I sure as heck love him for being so level-headed, calm and mature. Besides, he's one hell of a sexy man. *licks lips* Nothing can rattle that guy and he's in control at all times. That's actually something I'd like to see happening in Antidote--Gray losing his calm. I'm sure that would up the ante. All things considered I would have loved to see so much more of Gray though. Unfortunately he represented more of a supporting character and yet he clearly was in a leading role nonetheless. A role I enjoyed tremendously.

Don't… is an original and engagingly penned story. Moreover, it's actually a fascinating head f@ck. The plot and characters are intriguing and the smexy times are panty-melting hot. Add in the fact that some parts of Don't… are slightly disturbing and you can be sure the overall result is a great read. I guarantee you won't be dying of boredom while reading this book.

After reading Don't… I just felt f@cking peachy and I can't freaking wait to get my grabby hands on Antidote!! We don't have a release date yet?


Warning
Don't… contains very explicit sex and language, toys, spanking, bondage and (view spoiler) It also contains (view spoiler)Therefore it's not for the faint of heart.