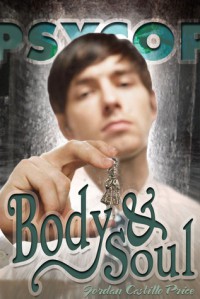 This is a little sample of my favorite part of Body and Soul...
I stared at that electrical outlet and focused outside myself, so Jacob had time to give me the reach-around. Clock. Microwave. Coffee maker. Coffee grinder.
What if one of 'em fell into the sink while he was pile-driving me and I ended up electrocuted? Not that there was any water present. But the lethalness of the combination of electricity and sinks is hard-wired into our primordial lizard brains, so that just seeing the two of them at the same time was enough to leave me thinking about biology class and twitching frogs…
"Uhn, God, Vic. So good. Fuck."


HolycrapthiswashotandIlovedit!! No rest for the wicked…

Body and Soul opens up with Vic and Jacob eating at Jacob's parents' home, celebrating Thanksgiving. Aside from Jacob's curious nephew who's pestering Vic with endless questions, an arm can take on a life of its own. It goes without saying that even at Thanksgiving, Vic's special ability is going to haunt him at the peaceful family table. However, the visit is short-lived when Warwick calls Vic back to duty. In order to find a few missing people, Warwick teams Vic up with a new partner named Zigler.

Whew. Body and Soul is my favorite installment in the PsyCop series. I know I'm not done yet and that might change again. Still, I really enjoyed everything about Body and Soul. The sex was INCREDIBLY enticing and panty-melting HOT. Vic's hilarious and fascinating mind worked overtime and Jacob was his usual sexy, hunky studly self. YUM!

"Fucking hot," I mumbled into my forearm. "Fuck me harder."
Jacob went ballistic because I'd managed to string together more than two words while he was fucking me.

I loved meeting Jacob's family and seeing Vic and Jacob (well, mostly Jacob) hunting appropriate living quarters was oh-so entertaining. Boy, someone should go down on me so exquisitely too, just so I can be convinced to buy a special building.

I know I sound like a broken record but Vic and Jacob's chemistry is so great and palpable and they are incredibly sexy together. Whatever they do I just love it. Boy, the sex in the kitchen was mind-blowingly good. I couldn't believe that I had to laugh my ass off at Vic's crazy-funny train of thought while at the same time I felt the need to take a verrrry cold shower when studly Jacob drilled him in the counter. Holy fuck! I need to calm down…

Also, I'm getting quite fond of the typical Vic terminology "um" and "cripes". And public displays of affection might become somewhat more normal for Vic because he seems the get used to it eventually. Me likey. I love how much Jacob cares about Vic; I think he'd do anything for him. Hmm…wait a second, what did Jacob say?

"I would do anything for you," Jacob said, and he seemed clear as could be, totally lucid. It wasn't fair that someone could shoot his load and then say things like that.

Vic talking to his deadly annoying (pun intended) and ghostly neighbor is sooooo priceless. I must admit that I'm reading these books for the sake of Vic and Jacob and the compelling writing, and not so much for the sake of the plot. Don't get me wrong, the plot is not bad by any means but it's not what allures me to devour the books. Besides, I really don't think that Vic is such a badass cop who could bring down any villain with no sweat. I mean that dude is physically so out of shape it's not even funny anymore and I'm not sure if he's such a genius with his arm either. On the other hand, I just love his lively mind.

And then there's Crash again…

Gosh, he's an irritating jerk, albeit a lovable one. I need to read his short story.

I'm really, really thrilled how much I enjoyed this story. Everything is hunky-dory.

Though I'm going to take a little break in order to savor the rest of the series all the more. Besides, I'd like to avoid a needless disappointment by getting fed up a little bit. I'll be back, I promise.

How could I even think of reading anything else at the moment? Of course I'm tackling Secrets now.