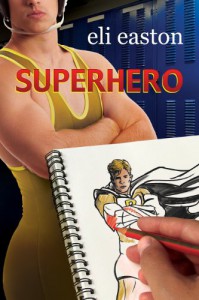 From that day on, Owen was my best friend—jelly to my peanut butter, fellow pea in my pod, Sam to my Frodo. And I was his.

„Clearly, this is your first wrestling match,“ I said dryly.
“But…why don’t they wear something underneath?”
“Owen says it’s a macho thing. Guys who wear straps or cups are considered lame. I guess it’s like gladiator mentality. Burp, fart, sweat, let it all hang out.”

„You’re a dork,“ I said.
“If I’m a dork, then you’re a bigger dork for being friends with me.”
“It doesn’t work that way. It’s not like people exude a dork ray or something. Well, sometimes you do, but I’m immune.”
“Oh, I see. You do know that you’re the king of dorks and that this conversation is absurd.”

Holy sexual paradise, Batman, I was so fucking glad I was gay!

Superhero is the story about Jordan Carson and Owen Nelson. Jordan and Owen couldn't be more different from a physical POV and yet they have some things in common. They are both students, best friends and developed a successful cartoon project together. It's called Pin Man and Pencil Boy. Jordan draws it and Owen contributes the speech bubbles. Owen is a very good-looking kid with several excellent attributes. He's a great sportsman and loyal friend, quiet, reasonable, very polite and the Wisconsin state champion wrestler.

(…) He always took his glass to the sink and rinsed it out. I mean, the kid was a parent's wet dream.

Jordan is all kinds of adorably geeky, stylish, witty and he excels at drawing. He's simply amazing and you can't not love him. Jordan loves to dream big; he wants to do a lot of things in his life. However, his biggest wish is to have Owen as his boyfriend. But Owen is straight or…is that a wrong assumption?

Despite its shortness this story packed quite a heroic punch. I enjoyed it very much. Extremely likable main characters, a good storyline and engaging writing that provided plenty of entertaining, thoughtful and witty dialogue made this an all-around winner. It was so much fun to follow Jordan and Owen, especially Jordan. I also liked the more serious tone of the plot. Superhero is another book that deals with bullying. It shows once again how important it is to stand up and fight for the things you believe in.

Also, I think this short story conveys another important message. Sometimes you have to sacrifice your alleged destination to find your real goal. It's not important if others are happy as long as you're making something of your life that will let you feel comfortable with yourself.

Superhero is a story that left me with a warm and fuzzy feeling in my belly and aside from the pretty steep pricing (4.10 euro for 98 pages), I have no complaints. I closed the book with a big smile on my face.

To sum it up in one word: adorkable.