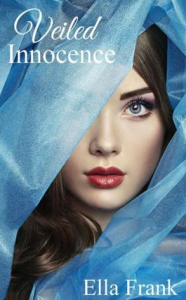 Due to personal reasons, Mr. McKendrick (sorry, no first name because that would be a spoiler) decided to come back to Denver. Yet he wasn’t prepared for what he would be ‘finding’ there.

My thoughts
When you have read an author’s entire backlist then you’re compelled to choose a favorite. Also, an important point in reviewing books is being honest. I do give Ella plenty of credit for always writing different stories as well as different characters. One thing’s for sure, she switches effortlessly from a fun and light plot to something much more wistful and gloomy. Long story short, I enjoyed Veiled Innocence but it isn’t my favorite book by Ella Frank. Besides, it didn’t hit the originality, the painful intensity, the staggering beauty and the mind-blowing steam level of Blind Obsession. Thus it’s obvious which book of hers is my favorite. I tend to ruminate a lot when I don’t fall for the characters, especially when the book has been written by one of my favorite authors.

I distinctly remember when more than a few of my classmates and I were swooning over our best-looking teachers. However, in light of Addison’s actions, none of us would have taken the next step and hit on any of them in such a brazen and unapologetically candid manner. I also find myself pondering as to why I’m such a sucker for student/teacher stories. Let’s face it, we all know that on a moral and ethical level this is so very wrong, and yet I can’t resist feeling irresistibly drawn to this kind of trope over and over again. What I feel opposed to in real life works quite fine in my fictional world. Not always, though (no kidnapping, human-trafficking and slavery and rape stories for Baba). No matter how I look at it, a little something was missing here but I hope you'll find it. What I couldn't seem to see or feel might as well be within touching distance for you.

Veiled Innocence is told from Addison and Mr. McKendrick’s POVs and switches between past and present events. I’m actually not a fan of timeframe hopping. Despite the many shifts, however, the plot flowed smoothly and didn’t detract from my enjoyment of the story.

Addison is brazen and ruthless and I sure as heck can’t accuse her of not going after what she wants. Plus, she’s burdened by lots of baggage due to her messed up background and she has to deal with mental issues. Addison is very obsessive and unveils stalker-ish tendencies. I was torn between feeling sorry for her, knowing what she went through in the past three years, and an unshakable sense of anger because she showed not one iota of will to respect boundaries. In fact, it was pretty shocking to see how easily she overstepped any and all boundaries and challenged and tempted her teacher all. The. Time. Addison played a dangerous game and I wasn’t sure if she even cared about the consequences. I can’t and won’t conceal my dislike that I felt for her. On the other hand, I must give her credit for taking the blame when the s@it hit the fan.

Despite Mr. KcKendrick being a very sexy teacher with gorgeous, long-ish hair, he didn’t quite win me over. I appreciated the fact that he scrutinized his choices numerous times and he never acted like a predatory lecher. Mr. McKendrick’s father had instilled a sense of morality in him and he was aware of his transgressions. Even though he tried pretty hard to resist Addison, ultimately temptation won over common sense. On second thought, I guess what I missed most about his personality was this all-encompassing charisma that Phillipe Tibideau, hero of Blind Obsession, exuded in spades.

Bottom line, Veiled Innocence is an interesting and solid read and I enjoyed it. The writing is good and Ella captured the somber and gloomy atmosphere nicely. I loved the history and mythology references, and I think Ella did a great job at intertwining all those references with the plot. A few tempting smexy times (without any ick-factor) and a couple twists and turns made for another satisfying reading experience from this talented author. Ella, whatever you’ve got in store next, I’ll be ready to read it!

Recommended to lovers of student/teacher stories and all fans of Ella Frank.


All quotes approved by author.

**ARC courtesy of Ella Frank in exchange for an honest review**