Not as good as the two previous books. 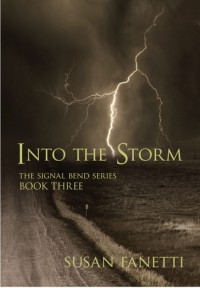 Unfortunately Into the Storm wasn't up to par with the two previous books.

I could have given Show five stars in order to honor the author's "originality" and courage for having written a sexy and hot hero in his late 40s (Show is almost fifty-years-old). As many of you know I'm a sucker for older MCs. By the way, it would have pleased me immensely when Show had been paired with a strong woman in her late 40s.

For the sake of all those readers who haven’t started this series yet, I won’t be going into real details as to what happened to Show in the previous book Behold the Stars. Suffice it to say that his loss was huge. He’d been drowning his grief in too many bottles of hard liquor and didn’t socialize much. Even before he lost everything, his family life wasn’t at its best. Show was still trying to weather that storm of grief, pain and loss when Shannon entered his life. The manager of Signal Bend's new Keller Acres Bed & Breakfast brought a fresh breeze into his life before he was even ready to acknowledge it. In the process he had to reacquaint himself how to court a prospect love interest. Lemme tell you it started off a little bit bumpy but in the course of time good ole Showdown was back in the swing of things. Mmm…it might be of interest to you when I say it was pretty hot. Not too shabby for an almost fifty-year-old biker dude, for sure.

I didn't understand why Shannon acted self-righteous and bitchy because she was pretty much aware of Show's tragic fate when she hit on him. Thus I really expected her to be more sympathetic and understanding towards Show's position and his state of mind. Show is a level-headed man, taciturn and a thinker. He's the opposite of hothead Isaac, hero of Move the Sun and Behold the Stars. First, Show acted indifferent, like he wasn't interested and he simply ignored Shannon. However, as time passed, he had to admit that he wanted to share his life with someone even though he was afraid to bind himself to a woman again. Being intimate with Shannon made him realize how lonely and hollow his life had been (view spoiler)

What saved this book for me was Show. He's the s@it! I have a little crush on that HUGE hunk of a man, and I would have loved to give this book a higher rating, but I honestly didn't like Shannon. In fact, I would have preferred to seeing Show with a woman who could have kicked some serious ass. Someone…different. Shannon was too insensitive and her secretiveness got on my last nerve. Oh, and that effin' freak-out of hers…WTF? It was very OTT. Despite there being a couple incredibly intense and heart-breaking moments depicting Show and his gut-wrenching grief, I'm very sorry to say that I couldn't get past my dislike for Shannon. I didn't mind the quieter tone of the story which accommodated the calm hero nicely, and romance readers will be pleased to hear that Into the Storm is much less violent than its predecessors.

Into the Storm is a story about laying old demons to rest and finding a sense of purpose again. It's also about rediscovering your needs, wants and desires and acting upon them without feeling guilty. Show has found his road again.

If you are a fan of the Signal Bend series then I recommend you to read Into the Storm.